One of the most significant annual projects I worked on when I was the graphic designer at the NSW Ministry of Health was managing the print production and updates for the My Personal Health Record – also known as the Blue Book. The Blue Book is given to every newborn’s parents to keep as a record of their growth, development, injuries and innoculations, from birth to the end of childhood, and has been in use in its present form since 1988, although the blue book has existed in a much simpler version since the early 1900s.

The book is a blue A5-size tabbed ring binder that allows for documents to be inserted and rearranged as required. The costs of the book are significant – from what I remember 30,000 were printed annually, and the materials had to be non-toxic in case a child chewed on it, and rugged enough to survive use for at least a decade. We were constantly looking for ways to cut the production costs, such as printing the entire book in one PMS colour, providing pages that were used frequently as a pad that midwives could fill in and insert as needed, to avoid unnecessary wastage of books, and printing on a whooping cough warning on the cover instead of providing it as a sticker, which cut down on labour. In addition to the production costs we always had to print extra as parents would lose them or they would be destroyed in some way, which meant that most of the information within it was vulnerable to loss.

In 2012 NSW Health developed an online version of the Blue Book with a Smartphone app which meant significant savings in production costs as well as reducing data loss. HealthShare NSW assisted with the trial of the eBlue Book in several hospitals before it was approved for general use in 2013. At this stage I was producing all of HealthShare NSW’s design collateral and I developed a series of posters that were used in the trial.

The print version of the Blue Book 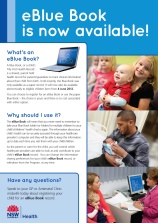 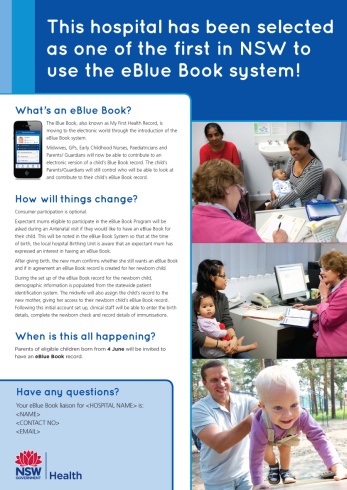