The Agency for Clinical Innovation is one of the four ‘pillars’ of the NSW Health organisation – each pillar oversees aspects of the behemoth that is the public health system, and provides advice and information. ACI has over thirty networks (groups) of clinicians, health workers and community members that focus on an area of healthcare and provide guidelines for better patient care, such as the cardiology network, nutrition network, and radiology network.

I’ve done a lot of work for them in the last five years, and one of the projects was a redesign of their website in 2011. Prior to this they had been part of the NSW Ministry of Health, and had been gradually establishing their independence as a separate entity – the website was one of the last projects of this process.

I’m not a web designer, coming from a predominantly print background, but I have on occasion designed the ‘skin’ of websites that, after much editing and tweaking, I send as PSD files to the web developer to code and upload. Below are screenshots of how the ACI website originally looked, the first design that I provided them, and the final site that was approved and uploaded in early 2012. The ACI has just redesigned their website again recently – I wasn’t involved in this as HealthShare NSW (the organisation I work for) had cut back on providing external design services to other Health Agencies, because its own growth meant that the internal design needs had increased dramatically. However, it looks fabulous! Check it out – you might be interested in the excellent work they do. 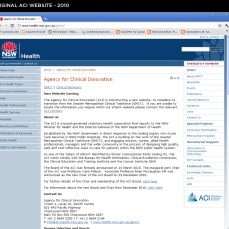 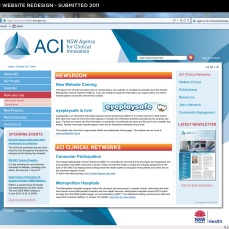 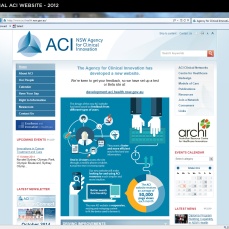