This was a project that I worked on in 2008 at the NSW Department of Health to help promote the recently published Clinical Guidelines for Nursing and Midwifery Practice in NSW. In particular, the project officer wanted to highlight the guidelines for nurses working with patients with drug and alcohol issues and what care they required.

Working with the project officer we came up with the taglines and the branding of the collateral, which included three posters, a sticker, DVD and a mug (because hospitals are run on coffee). The brief for the posters was that they had three messages they wanted to convey, and that they wanted to highlight that drug and alcohol issues affect both genders and wealthy people as well as poor. The image of a man drinking in a bar and the close up shot of cigarettes and syringes were fairly easy to find in online picture libraries, but the female drug taker photo was impossible to find.

In the end my friends and I set up a photoshoot in my living room to get the final shot. My sister volunteered to be the hand model (and used it as an excuse to get a manicure) and we raided the kitchen pantry to get the ‘drugs’ – icing sugar, oregano and whatever medications and vitamins we could find in the bathroom. The syringes were supplied by the Nursing and Midwifery health department. For the final posters I desaturated all the photos so they would have a consistent look across the three posters. 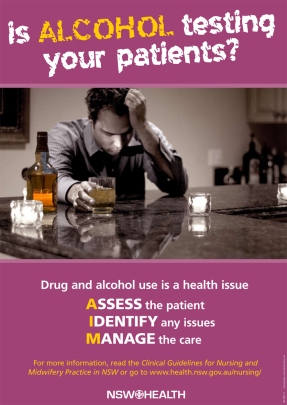